BACKGROUND AND OBJECTIVES: The hydrodynamic uncertainty of the ocean is the reason for testing marine structures as an initial consideration. This uncertainty has an impact on the natural structure of the topography as well as marine habitats. In the hydrodynamics laboratory, ships and offshore structures are tested using mathematical models as input to the wave marker. For large wavenumbers, Benjamin Bona Mahony's equation has a stable direction and position in the wave tank. During their propagation, the generated waves exhibit modulation instability and phase singularity phenomena. These two factors refer to Benjamin Bona Mahony as a promising candidate for generating extreme waves in the laboratory. The aim of this research is to investigate the distribution of energy in each modulation frequency change. The Hamiltonian formula that describes the phenomenon of phase singularity is used to observe energy. This data is critical in determining the parameters used to generate extreme waves.
METHODS: The envelope of the Benjamin Bona Mahony wave group can be used to study the Benjamin Bona Mahony wave. The Benjamin Bona Mahony wave group is known to evolve according to the Nonlinear Schrodinger equation. The Hamiltonian governs the dynamics of the phase amplitude and proves the Nonlinear Schrodinger equation's singularity for finite time. The Hamiltonian is derived from the appropriate Lagrangian for Nonlinear Schrodinger and then transformed into the Hamiltonian  with the displaced phase-amplitude variable.
FINDINGS: Potential energy is related to wave amplitude and kinetic energy is related to wave steepness in the study of surface water waves. When , the maximum wave amplitude and steepness are obtained. When , extreme waves cannot be formed due to steepness. This is due to the possibility of breaking waves into smaller waves on the shore. In terms of position, the energy curve is symmetrical.
CONCLUSION: According to Hamiltonian's description of the energy distribution, the smaller the modulation frequency, the greater the potential and kinetic energy involved in wave propagation, and vice versa. While the wave's amplitude and steepness will be greatest for a low modulation frequency, and vice versa. The modulation frequency considered as an extreme wave generator is , because the resulting amplitude is quite high and the energy in the envelope is also quite large. 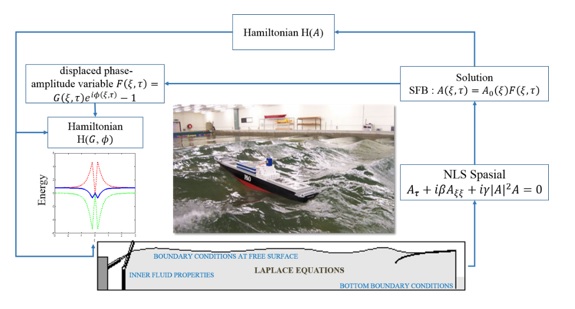 ©2022 The author(s). This is an open access article distributed under the terms of the Creative Commons Attribution (CC BY 4.0), which permits unrestricted use, distribution, and reproduction in any medium, as long as the original authors and source are cited. No permission is required from the authors or the publishers.