8 Asian School of the Environment, Nanyang Technological University of Singapore

BACKGROUND AND OBJECTIVES: For the first time, an earthquake swarm occurred from April to August 2021 in Lake Toba; Indonesia, the world’s largest caldera lake. Although the earthquakes were located in a volcanic environment, the swarm activities could also be related to tectonic activities on the Sumatran fault. The swarm activities occurred at shallow depths and may influence the ground surface condition in which soil or rock below the subsurface can amplify the shaking. The research objective was to investigate the characteristics of the earthquake swarm in the Toba Caldera from the spectrum of the earthquake waveforms, site frequency, and horizontal-to-vertical ratio of sites.
METHODS: The spectra of very closely located swarm and nonswarm earthquakes were analyzed to investigate the differences between both types of seismic events. The seismic spectral ratio of horizontal-over-vertical components was applied to calculate the spectrum in the active swarm region from all newly installed seismic sensors. The root mean square was applied to average the amplitude of the horizontal components. Then, the values of the horizontal-to-vertical ratios were obtained by comparing the average values of the horizontal and vertical components.
FINDING: The microtremor study showed a more complete spectrum waveform from the low-to-high frequency of a non swarm earthquake, while the swarm earthquakes generated high-frequency seismograms. From the combination values of natural site frequencies and the horizontal-to-vertical ratios, the Toba environment can be classified into five clusters: I) Samosir–Hasinggaan, II) Samosir–Parapat, III) Silimapuluh, IV) Balige–Paropo, and V) Panjaitan. Samosir Island located in the middle of the Toba Caldera has the highest frequency and amplification, which are divided into two clusters.
CONCLUSION: Cluster I, with high amplification corresponding to the earthquake intensity, was felt by people in northern Samosir. Cluster II is located in the southern part of Samosir Island. Cluster III features moderate values of amplification and seismic vulnerability and therefore needs attention before future infrastructure development. Cluster IV, located in the southern and northern regions with high amplification and vulnerability, is associated with the Quaternary eruption. Cluster V, situated in northeastern Toba, has the lowest amplification and vulnerability compared to other clusters. The microtremor results provide good correlation with the geology in the volcanic environment of the Toba region. 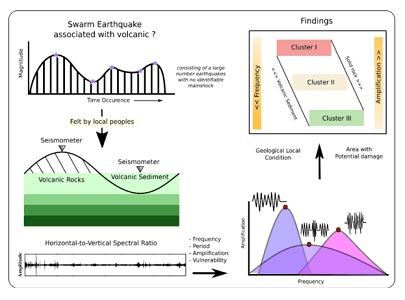 ©2023 The author(s). This article is licensed under a Creative Commons Attribution 4.0 International License, which permits use, sharing, adaptation, distribution and reproduction in any medium or format, as long as you give appropriate credit to the original author(s) and the source, provide a link to the Creative Commons license, and indicate if changes were made. The images or other third party material in this article are included in the article’s Creative Commons license, unless indicated otherwise in a credit line to the material. If material is not included in the article’s Creative Commons license and your intended use is not permitted by statutory regulation or exceeds the permitted use, you will need to obtain permission directly from the copyright holder. To view a copy of this license, visit: http://creativecommons.org/licenses/by/4.0/