The objective of this study was to develop a forecast model to determine the rate of generation of municipal solid waste in the municipalities of the Cuenca del Cañón del Sumidero, Chiapas, Mexico. Multiple linear regression was used with social and demographic explanatory variables. The compiled database consisted of 9 variables with 118 specific data per variable, which were analyzed using a multicollinearity test to select the most important ones. Initially, different regression models were generated, but only 2 of them were considered useful, because they used few predictors that were statistically significant. The most important variables to predict the rate of waste generation in the study area were the population of each municipality, the migration and the population density. Although other variables, such as daily per capita income and average schooling are very important, they do not seem to have an effect on the response variable in this study. The model with the highest parsimony resulted in an adjusted coefficient of 0.975, an average absolute percentage error of 7.70, an average absolute deviation of 0.16 and an average root square error of 0.19, showing a high influence on the phenomenon studied and a good predictive capacity. 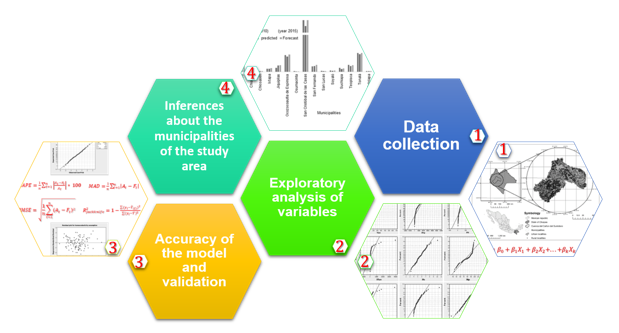