The impact of sound land use management to reduce runoff

The study aimed to determine the impact of sound land use management to the runoff in Kabuntalan, Maguindanao in Tamontaka river basin. This was done through simulation and the comparison of the three land cover scenarios such as 2015 land cover, 2025 projected land cover and desired land use to determine its difference in terms of runoff. Hydrologic Engineering Center-Hydrologic Modeling System was used for simulating runoff. The geographic Information system was used for the preparation of the land use/cover and as an interface between GIS and HEC-HMS. Based on the result, 2025 land cover values in runoff volume and peak outflow increase from 2015 land cover while decrease in desired land use. There is shorter time to peak in 2025 land cover than desired land use. The 2025 land cover, represented the land cover without intervention, showed that agriculture will dominate the area with 78.28% of the total area, closed canopy forest and open forest cover will reduce with 4.57% and 6.78% of the total area respectively. The desired land use represented the sound land use management, showed that there will be 13.9% decreased in agriculture. This can, however, result to increase in close canopy forest (112.3%), grassland (125.7%), and open forest (4.3%). The study showed that desired land use will most likely reduce the magnitude of the flood than the 2015 and 2025 land covers. Thus, adopting sound land use management in Tamontaka river basin is crucial to reduce runoff and thereby mitigate flooding in the study area. 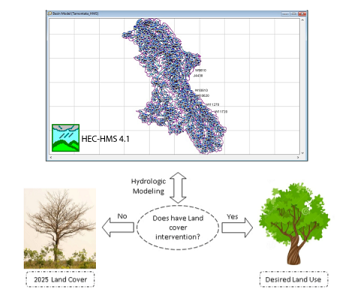