The current study deals with the physicochemical characterization, temporal variability and trophic state evaluation of a post glacial mountain lake in eastern Himalaya during the period of 2014-2016. Notable seasonal variations are recorded for physicochemical parameters of lake water. The values for electrical conductivity, total suspended solids, total dissolved solids, total alkalinity and Chloride are higher during the rainy season. Concentrations of total phosphorous (136.78±29.14 µg/L), total nitrogen (7177.78±1346.70 µg/L) and Chlorophyll-a (38.54±21.67 µg/L) in lake water are distinctly higher than the recommended standards for eutrophic condition of lake/surface water. Application of multivariate tools such as cluster analysis and principal component analysis reveals that ionic constituents of lake water are majorly associated to the geogenic and exogenic factors, with minor seasonal influences. Trophic state indices based on water transparency (3.15±1.57), total phosphorous (74.72±3.39), total nitrogen (82.64±2.83) exhibit hypertrophic nature of lake water; while trophic state index for chlorophyll-a indicate eutrophic condition. Deviations between Trophic state indices (TSICHLa-TSISD: -14±7.88, TSICHLa-TSITP: -9.17±3.33, and TSICHLa-TSITN: -17.56±5.29) infer that the nutrients (phosphorus and nitrogen) are not limiting factors for the algal biomass, and non-algal components such as suspended solids soil/sediment particles affects the light attenuation in the monitored lake. The observations reveal that trophic condition of monitored lake is in alarming stage. Therefore, measures should be taken on urgent basis in order to intercept the increasing trend in eutrophication, and for the restoration of water quality and integrated lake ecosystem. 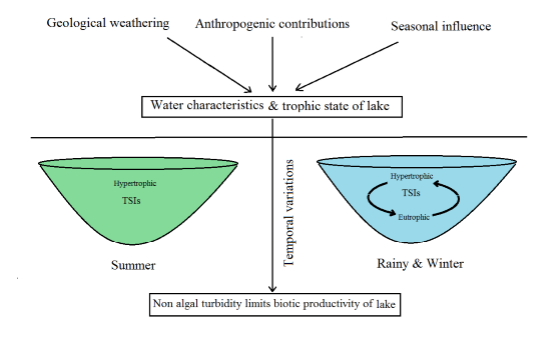