Eutrophication is considered as a serious problem in water reservoirs. Awareness about the eutrophic status of each reservoir could help in providing a better understanding of the problem in a global scale. The present study was conducted to assess temporal and spatial eutrophication index in a water reservoir (Sahand dam) in the northwest of Iran. Physico-chemical parametres that are effective on eutrphic condition occurrence  were analyzed, and trophic state index was calculated on a scale of 0-100 by measuring Secchi disk depth, chlorophyll a, total phosphorus, total nitrogen, total suspended solids, and phosphorus P/N ratio. Moreover, using the overlapping, the reservoir was mapped based on the mentioned index. Seasonal variation of dissolved solids in the reservoir was recorded due to precipitation and subsequent dilution and evaporation. Thermal stratification was observed during the summer months. The total trophic state index value was calculated as 55.5- 58.07, with minimum value belonging to P/N and maximum value belonging to suspended solids for individual parameters. There were some spatial and temporal differences for trophic state index in the reservoir. It was found that the whole area of the reservoir was in almost moderately upper-mesotrophic condition and in some target stations it was very close to eutrophic condition. The worst condition was observed in Qaranqu River as the main input to the reservoir. Due to the significant impact of suspended particles resulting from erosion of the surrounding lands on TSI value, there is an urgent need for mitigation measures to intercept eutrophication. 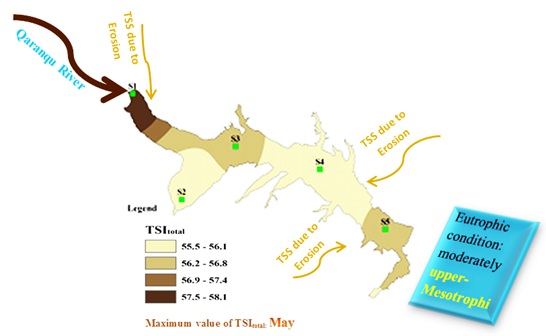