Newtown Creek is an industrial waterway and former tidal wetland in New York City. It is one of the most polluted water bodies in the United States and was designated as a superfund site in 2010. For over a century, organic compounds, heavy metals, and other forms of industrial pollution have disrupted the creek’s environment. The creek is also impacted by discharges from twenty combined sewer overflow pipes, which may deposit raw sewage or partially treated wastewater directly into the creek during heavy or sustained rain events. Combined sewer overflow events and associated nutrient over-enrichment at the creek drive eutrophication and subsequent hypoxia. At the current study, three sites were sampled one week apart during a dry period and a wet period, where indication of a combined sewage overflow event could be detected. 16s rRNA high-throughput sequencing from these three sites collectively yielded over 1000 species of bacteria belonging to twenty-two classes. Based on these data, it is hypothesized that differences identified in the microbiome on wet versus dry days are as a result of combined sewage overflow, street runoff, and additional fluctuations in the creek’s environment associated with rain. It was found that after a combined sewer overflows event, the levels of Gamma Proteobacteria increased while the levels of Actinobacteria decreased. However, levels of bacteria stayed relatively unchanged at a site further away from combined sewer overflows discharge. Species found in Newtown Creek include pelagic, marine, human and animal pathogens, hydrocarbonoclastic, and other environmental microbes. 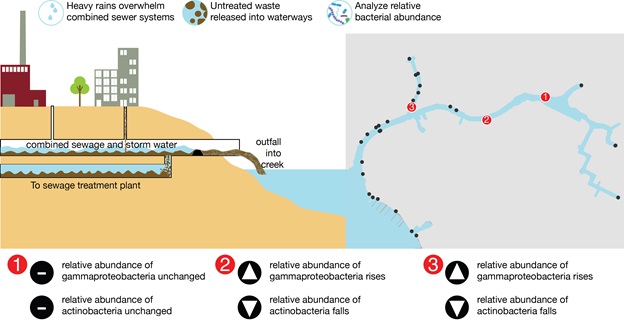