BACKGROUND AND OBJECTIVES: Biodiversity is the variety of life that exists on Earth, including all the organisms, species, and populations that come together in a complex manner to form communities and ecosystems. This study aimed to assess the diversity of microalgae in several different sub-habitats by identifying their types and abundance in sediments, mangroves, macroalgae, and water columns; additionally, this study analyses the environmental factors that affected the abundance of microalgae in several sub-habitats.
METHODS: This study used a quantitative descriptive method with data collection techniques, incorporating the purposive sampling method. Data were analysed using non-metric multidimensional scaling.
FINDINGS: The results showed that the composition of microalgae species found in the sub-habitats of sediments, mangroves, macroalgae, and water columns at Siwil Beach were the class of Bacillariophyceae (70%), Chlorophyceae (17%), and Cyanophyceae (13%) in all sub-habitats. In Sempu Island, microalgae were found only from Bacillariophyceae (100%) in the four sub-habitats. The highest abundance of microalgae on Siwil Beach was in the sub-habitat of mangroves, with a total of 5,423,073 cells/cm2, while the highest abundance in Sempu Island was in the sub-habitat of macroalgae, with a value of 1,986,252 cells/cm2. Moreover, based on non-metric multidimensional scaling analyses, there was no similarity of algae diversity between Siwil Beach and Sempu Island, with a high variation of microalgae.
CONCLUSION: The present study demonstrated that the class Bacillariophyceae dominated the communities of microalgae found both in Siwil Beach and Sempu Island. Moreover, factors that mainly affected the abundance of microalgae were environmental, which is already proven by the measurement of water quality in each sub-habitat at both locations. Siwil Beach and Sempu Island water quality was relatively still under the Indonesian national quality standard for seawater. This research is thought to be the first step in exploring the diversity of microalgae in several sub-habitats in East Java, Indonesia, and linking the type and availability of microalgae found in various sub-habitats with environmental water quality parameters and human activities around the waters. In addition, this paper provides the basic information of microalgae diversity based on sub-habitats, especially in the southern part of East Java Indonesia. 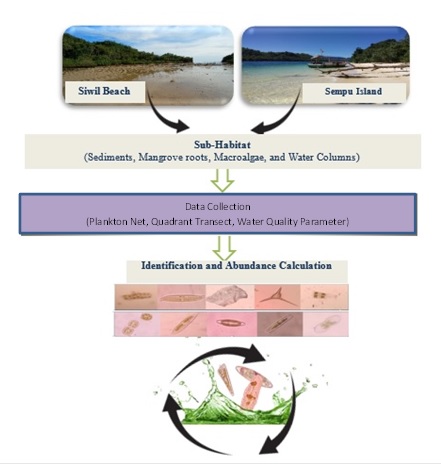 ©2022 The author(s). This article is licensed under a Creative Commons Attribution 4.0 International License, which permits use, sharing, adaptation, distribution and reproduction in any medium or format, as long as you give appropriate credit to the original author(s) and the source, provide a link to the Creative Commons license, and indicate if changes were made. The images or other third party material in this article are included in the article’s Creative Commons license, unless indicated otherwise in a credit line to the material. If material is not included in the article’s Creative Commons license and your intended use is not permitted by statutory regulation or exceeds the permitted use, you will need to obtain permission directly from the copyright holder. To view a copy of this license, visit: http://creativecommons.org/licenses/by/4.0/