BACKGROUND AND OBJECTIVES: Soil or rock properties where buildings are situated play an important role in the ground shaking caused by an earthquake. The highly populated Banda Aceh city in the northernmost Sumatra is flanked by two active faults, the Seulimeum and the Aceh segment. Therefore, it is crucial to investigate the subsurface characteristics of the region to reduce the earthquake risk as there was no regional study has been conducted so far.
METHODS: Characteristics of the soil or rock of the subsurface were derived from various seismic parameters. The seismic microtremors were recorded at 36 sites covering the highly populated city and the two active faults. The spatial autocorrelation method was used to obtain a dispersion curve based on the relationship between seismic frequencies and phase velocity from triangular geophones array to determine the shear wave velocity of the subsurface layer. The seismic amplification, dominant frequency and vulnerability value at each measurement point were measured using the horizontal-to-vertical spectral ratio method. The maps of velocity structure and HVSR parameters were generated from the interpolation of those seismic parameters.
FINDING: Based on the variation of the four geophysical parameters: shear wave velocity, seismic amplification, dominant frequency, and seismic vulnerability, the study area can be clustered into five different groups: I) Banda Aceh, II) Jantho, III) Krueng Raya, IV) Lhoknga-Lhoong, and V) Seulawah, which classify the different types of rocks. The classification of soil properties from the combination of shear wave and horizontal-to-vertical spectral ratio data correlates with the geology of the study area.
CONCLUSION: The Banda Aceh city, flanked by the two active faults, is characterized by low shear wave velocity and high amplification because the city stands on the sedimentary basin; thus, it requires a detailed investigation prior to constructing infrastructures. The other clusters are located on the relatively less vulnerable areas, indicated by moderate shear wave velocity and moderate to low seismic vulnerability indexes. The joint analysis shows that the combination of physical properties, including the shear wave velocity, seismic amplification, and dominant frequency, can be used to investigate lithology and seismic vulnerability into a specific cluster. The research results are essential for hazard mitigation and can be used for disaster risk management by the local government. A detailed investigation with denser measurement points needs to be conducted to comprehensively describe the types of rocks in Banda Aceh and its surrounding. 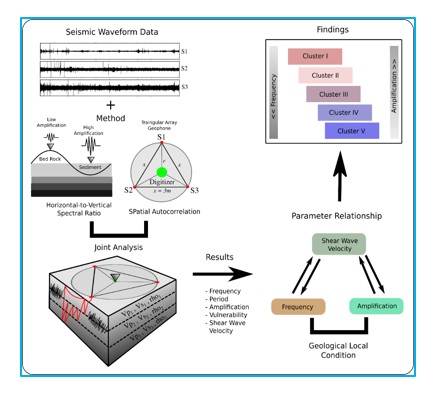