Impact of road infrastructure equipment on the environment and surroundings

BACKGROUND AND OBJECTIVES: The effect of infrastructure equipment is taking a toll on the health and economic well-being of residents all around the world. This is mainly because it contributes to ambient air pollution, noise, and vibration in the surroundings.  The study aimed at analyzing the effects of the road infrastructure equipment on the surroundings in Uganda. The emissions of carbon dioxide, carbon monoxide, nitrogen dioxide, hydrocarbons, and particulate matter were analyzed.
METHODS: Six road infrastructure equipment were sampled consisting of an excavator, roller, grader, concrete mixer, tamper, and wheel loader, obtained from a case study project in Kampala city, Uganda. The diesel exhaust air emissions were computed and analyzed using the emissions rate equation model for non-road equipment, developed by Environmental Protection Agency.  This was based on the horsepower and power rating of the equipment. Noise and vibrations levels were obtained using a sound level meter, seismometers, and accelerators, while following the National Environment Regulations.
FINDINGS: The greenhouse gas of carbon dioxide was the most predominant accounting for 84.1 percent of the total emissions. The grader was the highest emitter of this greenhouse gas, at 1,531.5 g/h, representing 37.1%. The lowest air pollutant emission was nitrogen dioxide at 1.43 g/h for the concrete mixer, representing 1.4%.  Overall, the equipment emitted more greenhouse gases than air criteria pollutants at 88.8% and 11.2% respectively. The highest criteria air pollutant was particulate matter at 100.5 g/h, emitted by the grader.  Most of the emissions met the standards stipulated by Environmental Protection Agency, for reducing emissions back to the environment, except particulate matter. However, the concentrations of some pollutants like carbon monoxide and nitrogen dioxide did not satisfy the limits required for ambient air quality that is safe for workers. All the equipment had noise levels way above the recommended 70.00 decibel, except for the wheel loader. Only the excavator produced vibrations higher than permissible vibration limit by 4%.
CONCLUSION: The criteria air pollutants of carbon monoxide, nitrogen dioxide, and particulate matter emitted by the equipment were all not safe to the workers. They exceeded the permissible limits of 50 ppm, 5 ppm, and 0.02 g/kW/h respectively. This partly shows why ambient air pollution had been reported in urban centers in Uganda. The study shows the need for strengthening the regulations and monitoring of the construction equipment being used, in order to protect the surroundings. 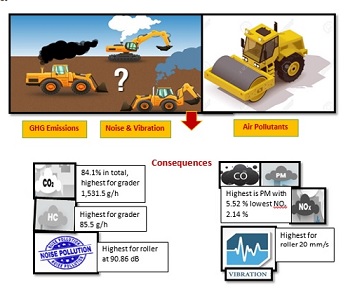