1 Department of the Environment, Faculty of Natural Resources and Earth Sciences, University of Kashan, Kashan, Iran

Understanding distributions of wildlife species is a key step towards identifying biodiversity hotspots and designing effective conservation strategies. In this paper, the spatial pattern of diversity of birds in Golestan Province, Iran was estimated. Ecological niche modeling was used to determine distributions of 144 bird species across the province using a maximum entropy algorithm. Richness maps across all birds, and separately for rare and threatened species, were prepared as approximations to hotspots. Results showed close similarity between hotspots for all birds and those for rare birds; hotspots were concentrated in the southern and especially the southwestern parts of the province. Hotspots for threatened birds tended more to the central and especially the western parts of the province, which include coastal habitats. Based on three criteria, it is clear that the western part is the most important area of the province in terms of bird Faunas. Despite some shortcomings, hotspot analysis for birds could be applied to guide conservation efforts and provide useful tool towards efficient conservation action. 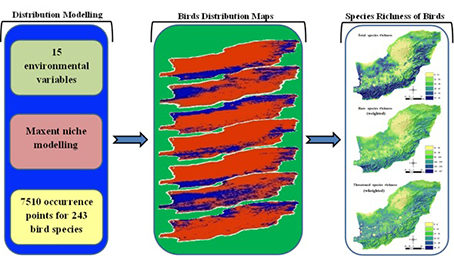