BACKGROUND AND OBJECTIVES: The vulnerability of the Sankana dam to organochlorine pesticide contamination is a major cause for concern. Indigenes rely on the dam for drinking water and irrigation of their farmlands as well as for fish and other aquatic delicacies. Virtually there exists no study on the residual levels of organochlorine or other pesticide contaminants in the dam despite its susceptibility to pesticide contamination. In the present study, the levels of organochlorine residues in fish and sediments from the Sankana dam were assessed.
METHODS: Pesticide residue extraction was achieved using acetonitrile containing 1% (v/v) acetic acid in the presence of sodium acetate, sodium citrate and magnesium sulphate followed by purification over activated florisil and sodium sulphate. Identification and quantification of residue extracts was done using a gas chromatograph conjugated with mass spectrometer.
FINDING: In all, varying levels of 13 organochlorine residues were detected, 11 of which were found in fish and 12 in sediment. Average mean levels of organochlorine residues found in fish ranged from 0.001 - 0.277 mg/kg. Residual levels of beta-hexachlorocyclohexane, delta-hexachlorocyclohexane, gamma-hexachlorocyclohexane, endosulfan-A and dichlorodiphenyldichloroethane in fish were relatively higher than their respective levels in sediment. Organochlorine residues found in sediment also ranged from 0.001 - 0.091 mg/kg. Dichlorodiphenyldichloroethylene, aldrin, dieldrin, endrin, methoxychlor, heptachlor, gamma-chlordane and endosulfan-B residual levels in sediment were higher than the corresponding levels in fish.
CONCLUSION: The study provides a baseline for continuous/regular monitoring of organochlorine contaminants in the Sankana dam and other waterbodies upstream and downstream. Where organochlorine residues exceeded their recommended permissible thresholds typically suggests possible recent/continuous use of such pesticides within the catchment area. There is therefore the need for appropriate measures and/or need to strengthen existing policies that bans the importation, sale and use of organochlorine pesticides via strict enforcement. 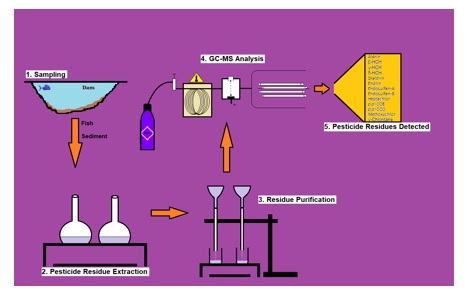 This article is licensed under a Creative Commons Attribution 4.0 International License, which permits use, sharing, adaptation, distribution and reproduction in any medium or format, as long as you give appropriate credit to the original author(s) and the source, provide a link to the Creative Commons license, and indicate if changes were made. The images or other third party material in this article are included in the article’s Creative Commons license, unless indicated otherwise in a credit line to the material. If material is not included in the article’s Creative Commons license and your intended use is not permitted by statutory regulation or exceeds the permitted use, you will need to obtain permission directly from the copyright holder. To view a copy of this license, visit: http://creativecommons.org/licenses/by/4.0/