Contamination profile of heavy metals in marine fish and shellfish

Rapid industrialization along with advanced agricultural activities led to the contamination in aquatic environment with heavy metals. Heavy metals ultimately pass into human body through having aquatic animals like fish, prawn and crab. In this study, accumulation of heavy metals (zinc, copper, iron, cadmium and lead) in various organs of four commonly consumed fish (Euthynnus affinis, Pampus argenteus, Descapterus macrosoma, and Leiognathus daura), prawn (Fenneropenaeus indicus) and crab (Portunus pelagicus) of Tok Bali Port, Kelantan, Malaysia were determined. Health risk was assessed using estimated daily intake and target hazard quotients. Although the concentrations of all the heavy metals in all fish, prawn and crab species were lower as per Malaysian Food Act, but the concentrations showed remarkable differences among the species and organs. The concentration of heavy metals in the gill was the highest of all fish species followed by in the liver and flesh. The total accumulation of heavy metals was maximum in Euthynnus affinis followed by Leiognathus daura, Descapterus macrosoma and Pampus argenteus of the fish species. However, the highest concentrations (µg/g) was for Zn (72.97±2.75), followed by Fe (4.309±0.68), Cd (1.189±0.78), Cu (1±0.87) and Pb (0.41±0.19) among all the heavy metal contents of fish. No significant variation (P<0.05) of the heavy metal concentration in prawn and crab species was observed. The investigation indicated that the fish, prawn and crab species of this port were safe for human consumption but the safe disposal of various wastes should be practiced to control the heavy metal accumulation in future. 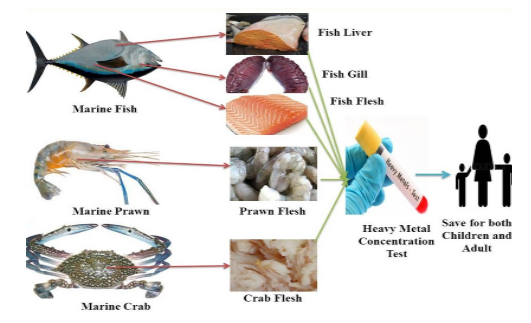