2 Republic of Turkey Ministry of Environment and Urbanization, Erzurum, Turkey

In the current study, the solid waste characterisation that belongs to Artvin city centre, which is located in East Black Sea Region of Turkey, were searched. The study has the feature of being the first study for the country of Artvin in terms of study. The field of study is composed of 7 neighborhoods and those can be separated into 3 groups as low, middle and high level of income. In this study, 11 kind of waste were examined, which are organic, paper, plastic, glass, metal, ash, electronic, textile, garden waste, hazardous and others. The effect of seasons on the amount of waste was examined; also, the relationship between the amount of waste and the level of income was also examined by using the two-way ANOVA analysis. Furthermore, all ratios of wastes that are located in Artvin city centre were searched. According to that, the waste ratios, occurs in one year, of all neighborhoods in the Artvin city centre are found as 61.06% organic, 10.28% paper, 9% plastic, 3.20% glass, 2.29% metal, 3.87% ash, 0.037% electronic, 1.58% textile, 1.35% garden waste, 0.51 % hazardous and 7.23% others. Those obtained values were compared with other similar studies in the literature. Moreover, for collecting recyclable wastes for the city centre 3 different methods are proposed named as methods collection from households, collection from buildings and collection from neighborhoods. These methods have been studied economically and the collection from buildings method is the most appropriate among these three methods. 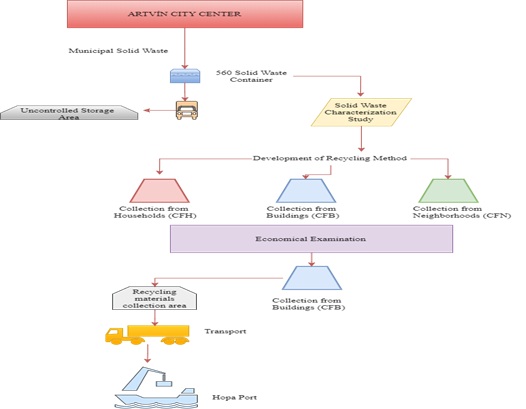